Home » Teaching and Learning with Technology » Women in STEM

By Joseph Ugoretz in Teaching and Learning with Technology on June 2, 2016.

Last week I was at the 2016 Summit of the National Center for Women and Information Technology.  It was an interesting conference in several ways (the large, mostly empty, slightly creepy desert hotel constantly evoked the warm smell of colitas), but mostly because of the very powerful keynote by Melissa Harris Perry.

She began by giving us a brief introduction to intersectionality and laying out the issue (a familiar one to this audience) of women’s underrepresentation in STEM, with some compelling (frightening) specifics.

Then Dr. Perry showed us this graph (which I’d seen before, but which shocks every time) from the AAC&U study in 2010. (source) 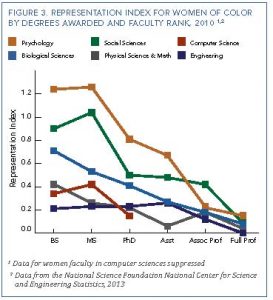 Those lines show the numbers of degrees and faculty ranks for women of color in various fields.  In physics, math, engineering and computer science, the numbers are low from the start.  But look how all the numbers dive off a cliff when you get to the rank of full professor.

So the problem is real (and she had plenty more examples, some personal).  And the audience knew it, and were more outraged still to hear all the examples and specifics.  And Dr. Perry was very good about explaining how very many of the attempts to solve this problem (computer engineer Barbies, coding boot camps, job “opportunities” that don’t address the culture of organizations, internships or training programs that never lead to actual decision-making roles), even when they’re well-intentioned, are doomed to go nowhere, because they don’t address the roots and real causes of the problem.  Which, of course, is deep, cultural, and complex.

But, to her great credit, Dr. Perry went even further than explaining the problem and critiquing unsuccessful solutions.  (I was at first worried that this was going to end up as one of those “it’s a bigger problem and therefore we have to just throw our hands up in the air” talks) She provided a list of real practical steps, with deep reach and broad foundations, that could actually, systemically, successfully, pave the way to creating and improving real opportunities for girls and women of all kinds to participate in real ways in the STEM careers and academic pursuits in which they are underrepresented.

Here are those steps, as I captured them.  Working from my notes, hastily scribbled, I am certainly missing and mis-paraphrasing some of what she said.  But I thought this was real enough and strong enough to document.

(As I said, I’m probably misquoting Dr. Perry, and almost certainly missed some of what she said.  9 points is a start, but only a start.  There’s more.  But I really love the way she looks at concrete practicalities as well as global principles)

As we at CUNY and all of education and higher education, and as I personally, work to include more opportunities for more people who have been left out of STEM (STEAM), I want to remember these as principles to work with.  And I would love to hear more discussion of all of them, at all levels.  Let’s talk about specific programs and initiatives, sure.  But also about bigger challenges and wider changes that address the real issues.

← The Technology of Smarthistory Macaulay Springboards: The Capstone as an Open Learning Eportfolio →